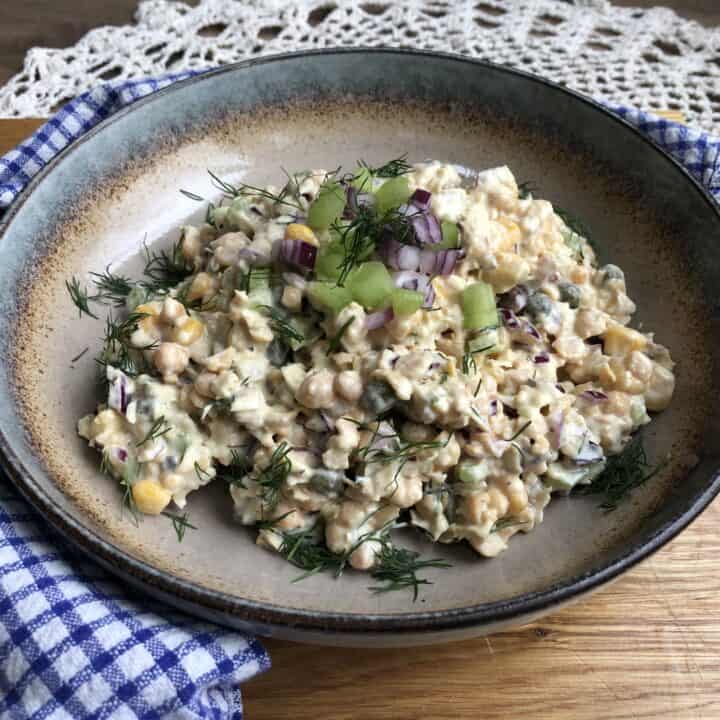 This vegan chickpea tuna is equally creamy, moreish and delicious. This tuna salad recipe is so easy to make, with mashed chickpeas and a creamy vegan mayonnaise dressing.

Recreating tuna with a vegan twist has been one of my favourite discoveries. You know when you’ve been vegan so long and you don’t necessarily miss certain things like fish? I was never a massive fish either many moons ago anyways, but I would occasionally eat tuna salad.

So I created e a vegan version anyways to mix things up and discovered so may new meal inspirations off the back of this vegan tuna mayo salad as it is literally so versatile!

Vegan chickpea tuna is so damn moreish. I’ve fashioned it into a number of yummy dishes, including vegan tuna melt, vegan tuna jacket potato, vegan tuna pasta salad and vegan tuna sandwich. It goes on everything!

It’s been awesome to make a big batch of it and have it handy in the refrigerator for when hunger strikes! It is great for meal prepping ahead of a busy week and is quick and easy to make.

This mock tuna salad recipe is a great option for something more refreshing, with crunchy, fresh salad and tasty mashed chickpeas for that texture. It’s also a relatively lighter option if you did not fancy many carbs like bread and pasta. And you can choose how much mayonnaise to add too.

And of course it’s completely gluten free vegan lunch option if required. You can of course tweak the vegan tuna mayo to your own taste. Don’t like onion? Prefer more mayo? Go for it. This is your lunch after all!

You can also mix up what crunchy vegetables to use. I love the combination of sweetcorn, red onion and celery. I have also used green onion and peppers.

Chickpeas come along as most vegan’s pantry essentials. They are affordable with a long expiry date – chickpeas are essentially vegan canned tuna right? Vegan tuna, courtesy of trusty mashed chickpeas!

Chickpeas are the clear winner in this recipe which help create the perfect texture. Alongside being rich in iron and protein – these highly nutritious legumes are a staple.

I have used canned chickpeas however my absolute favourite chickpeas to use are the jarred ones from my local Turkish shop. Chickpeas from a jar seem to taste so much better and they are much plumper too! And they cost the same amount as canned.

You could almost certainly use home cooked chickpeas from dried too. but obviously this would take a bit more preparation beforehand.

If you need instructions on how to cook your chickpeas from dried beans, or you just want another way to use chickpeas, you can find details in our vegan chickpea avocado salad recipe.

You really cant beat a creamy vegan mayonnaise, especially for this dish! We actually have a bomb recipe for Plant Based Mayo. Vegan mayo is easier to come by than ever before.

There are literally so many vegan mayonnaise brands out there now, which is awesome as it gives us a lot more choice.

as they are a fully vegan company. For the ultimate creamy and delicious vegan mayonnaise, perfect for this recipe, buy Just Mayo

I hate to say I only discovered how delicious capers were recently! They are like a tasty lemony olive hybrid that brings so much zing. They work perfectly in this vegan tuna salad recipe and really make it come alive.

Alongside some other yummy plant based ingredients like celery, sweetcorn and nori seaweed. This adds great texture, crunch and flavours to the vegan chickpea tuna.

Although nori gives it more of a “marine” like taste – I have listed this as optional as this can be more tricky to come by and even slightly more out of some peoples budgets. It is not an essential to make this dish delicious but an optional extra!

I am not a massive fan of processed vegan alternatives, especially faux fish as they contain such a heap of ingredients. However understandably, these products can help people transition to veganism while also are a quick alternative for those who are time poor.

Also, seaweed is great for iodine levels which can sometimes be difficult to obtain with a vegan diet. Some people may argue that vegans are lacking in Omega 3 without fish.

However there are plenty of vegan Omega 3 options – why not sprinkle some hemp seeds on to for extra nutrients? These are also a full protein source.

Another amazing twist this vegan chickpea tuna recipe can bring is by using chargrilled corn. After all, this is the perfect vegan summer lunch idea. I had some leftover vegan corn the day after a family BBQ.

The chargrilled corn simply added a beautiful and succulent deep flavour to the vegan salad. However regular corn will work just fine if more convenient.

When making this vegan tuna sandwich – there are a few key ingredients that will help make the winning combination.

1) This recipe yields around 2-3 portions. It will remain fresh in a sealed container in the refrigerator for around 3-4 days.

2) I have not attempted to freeze this, but probably wouldn't attempt as the vegan mayo may not freeze well.

3) If taking this lunch away, perhaps keep the creamy chickpea tuna seperate from leafy salad to maintain freshness and crispness of the leaves.

4) The addition of nori flakes is optional, but adds to a "fishy" flavour.

5) Add this vegan tuna to jacket potato, pasta or a sandwich

this is an estimate