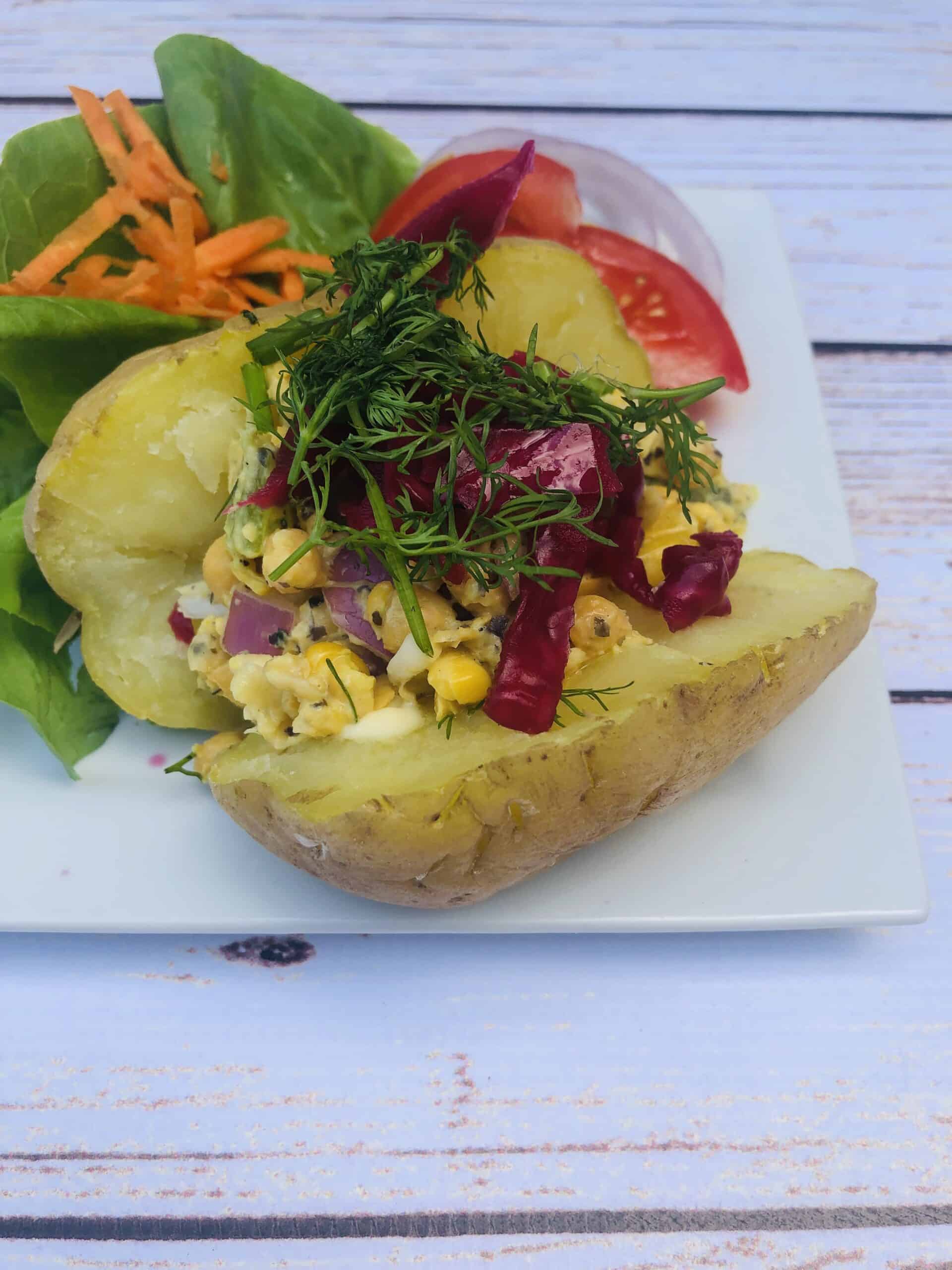 Jacket potatoes rock my world. I usually opt for a jacket potato if I’m planning on using the oven that day. For instance when baking a cake, as it can easily be popped in while preheating and cooking.

However my mind was blown when I discovered making a baked potato using the microwave oven! Super quick and easy to make the perfect vegan jacket in minutes.

I still can’t decide whether I prefer a baked sweet potato or regular vegan jacket potato. Both simply make a great base to build vegan goodness on top! Vegan potato toppings can be nourishing, tasty and satisfying.

Obviously jacket potatoes by nature are already vegan. However, I was really keen to replicate a childhood favourite of mine, tuna jacket potato. But of course the vegan tuna version!

This particular vegan baked potato was made much quicker than the usual oven way. I tested out for the first time blitzing the potato in the microwave. Much easier and efficient if you’re not planning on using the oven.

I’ve been super conscious of my energy usage recently, so it seems pointless cranking up the oven for one vegan stuffed potato. Its more worth it when bulk baking sweet potatoes.

I didn’t realise until recently that the microwave jacket potato also was the way my mom would make them quickly for us four hungry kids!

A baked potato for me has to have a knob of melted vegan butter on top with plenty of rainbow salad to accompany. On top, a creamy vegan tuna topping works so well! It reminded me exactly how I remembered eating jacket potatoes as a kid.

I am now on a mission to try out all the vegan baked potato toppings. And perhaps mix it up with some sweet potato jackets in there also. What’s your favourite vegan jacket potato fillings?

Often I simply love a plain vegan baked potato with a selection of salads. Some of my favourite are this delicious Israeli salad alongside this vibrant beet slaw.

When making this vegan tuna sandwich – there are a few key ingredients that will help make the winning combination.

There are literally so many vegan mayonnaise brands out there now, which is awesome as it gives us a lot more choice.

as they are a fully vegan company. For the ultimate creamy and delicious vegan mayonnaise, perfect for this recipe, buy Just Mayo

However another great option is our very own homemade, plant based mayonnaise recipe.

Chickpeas are the clear winner in this recipe which help create the perfect texture. Alongside being rich in iron and protein – these highly nutritious legumes are a staple.

Understandably, we don’t always have time to soak and cook them from dry. So I often use canned ones. These Eden Organic Garbanzo Beans

are certified organic and cooked in purified water.

This recipe yields around 2-3 portions. The vegan tuna salad will remain fresh in a sealed container in the refrigerator for around 3-4 days. I have not attempted to freeze this, but probably wouldn't attempt as the vegan mayo may not freeze well. I do not recommend freezing a baked potato.

This nutritional balance is computed and an estimate.