Vegan Salami (Seitan Salami) And the Best Ways to Use It 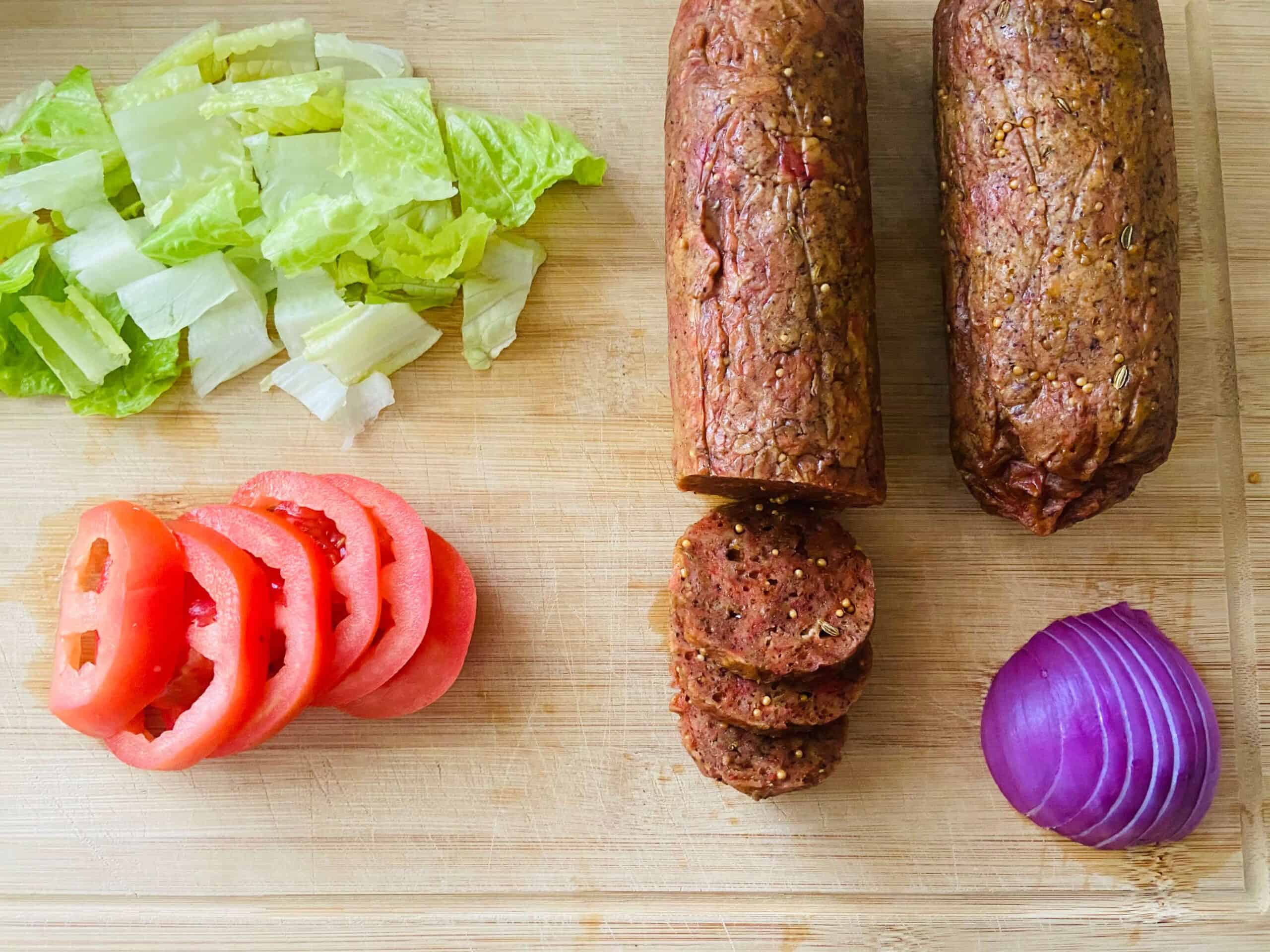 I get a lot of judgement for this, but my favorite types of meat back in the day was the highly processed kinds. I’m talking hot dogs, deli meats and chicken nuggets. Salami was a particular favorite.

Salami slices were amazing in sandwiches, fried as a breakfast food, in deli rolls and more, so I’ve worked on reproducing this deli meat, vegan style. At this point I’ve tried quite a few spice combos and ingredient variations and this is my favorite version of vegan salami.

It’s very low effort to make this seitan salami, so there’s no reason not to get cooking!

Just like with real salami, you’ll need quite a few spices to whip up this plant based salami. What you’ll need is:

If you haven’t worked with vital wheat gluten before, in short it’s the gluten extracted from flour. It looks just like a little bit of a yellower flour. You can buy vital wheat gluten in many health food shops, or even easier grab it on amazon

If you need more inspiration for ways to use vital wheat gluten you can check out our seitan ribs, or seitan bbq chicken!

If you want it to have a more red hue you should add a few drops of food dye. Obviously it doesn’t affect the taste but real salami is a very dark red and without any dye this vegetarian salami comes out brown.

How To Make Seitan Salami

To make the salami, mix all the dry ingredients together in a large bowl until well combined. In a medium bowl, mix together all the wet ingredients. This also needs to be very well combined, especially if you are using the food dye, because as soon as the liquid hits the gluten it will start absorb it and become tough to redistribute ingredients.

Mix the wet ingredients into the dry ingredients until combined, do not knead and use the minimal effort until it’s just combined. If you keep messing with the dough, it will change the texture of the final product.

Start boiling some water and set up your steamer. Take two peices of tin foil and then cut your dough in half. Roll one peice of your dough up into the tin foil to create a log, pressing the dough into the shape/width that you like while rolling the tin foil tightly around it. Twist the ends of the foil to seal it. Repeat with the second peice of dough.

Place in your steamer and steam for 45 minutes. When it’s finished remove from the pan, unwrap and allow to cool.

The texture will change as it cools, I always dig in before it cools down though. When it’s fully cool enjoy as is, use in recipes, or wrap it up airtight and store in the fridge.

Need a steamer? This collapsible one

takes up almost no space and is super affordable!

There are so many ways to use this vegan salami. Here are a few of my favorite: