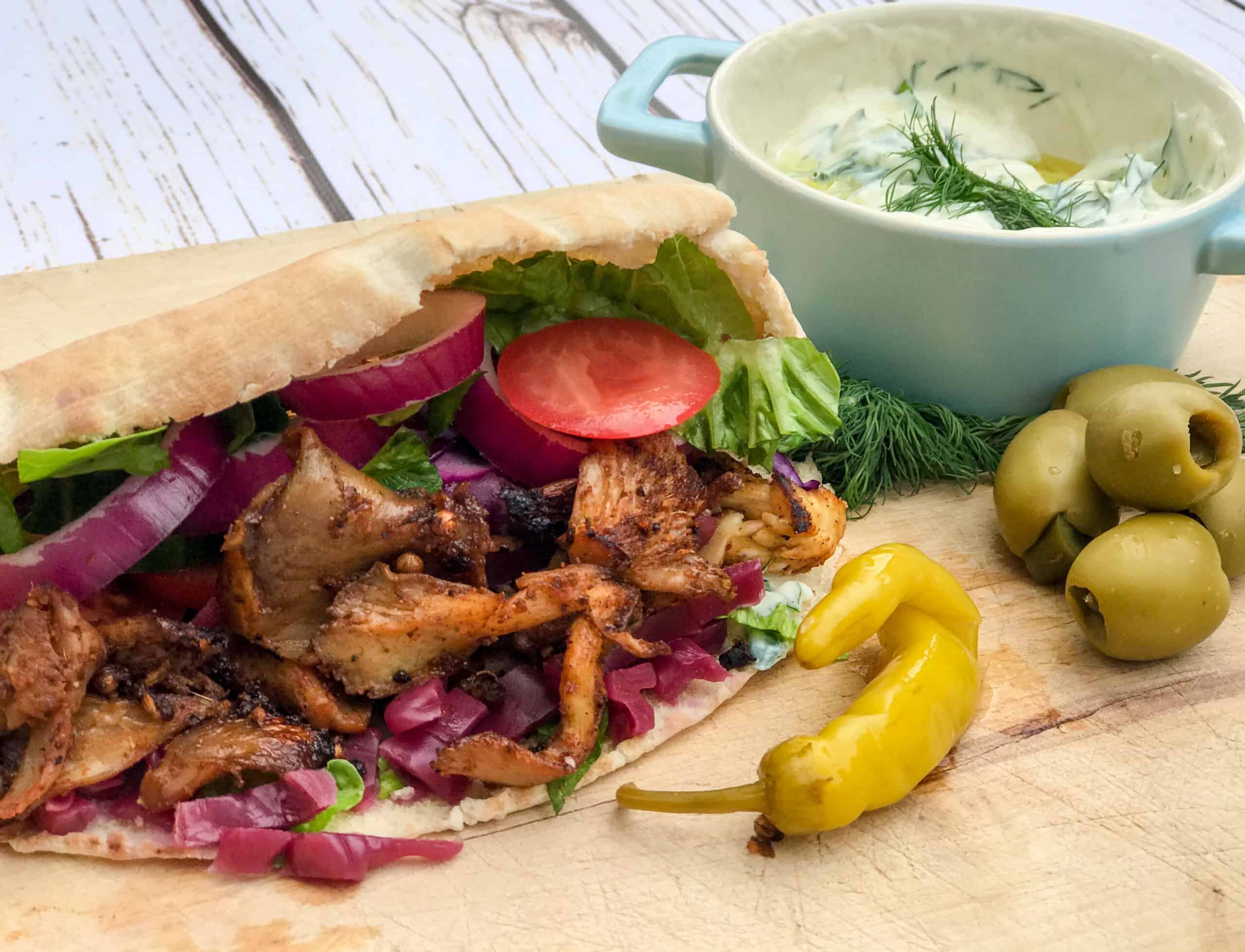 This Vegan Shawarma recipe is all your Middle Eastern dreams packed into a pita! This recipe is super easy to make and can either be presented really simply in a pita on a platter with a variety of pickles, olives and dips.

It’s really up to you how much time you would like to spend presenting it but the beauty is, it can be really simple! In some countries, Shawarma is also referred to as a vegan doner kebab.

Shawarma is typically made with meat, and of course, it’s our job as vegan recipe makers to veganise classics! Traditionally, the meat is sliced from a rotisserie and served with tzatziki sauce, pickles and a variety of salad including pickled red cabbage and Israeli salad.

Ordinarily, shawarma is served in a cone shape, wrapped in a warm flat bread, or in some cases, a pita pocket.

A lot of my dishes are inspired by travelling and I really loved the food in places like Turkey, Israel and Jordan. I have used this inspiration and made my own take on a vegan shawarma recipe.

I couldn’t believe how well oyster mushrooms could replicate kebab meat in this vegan doner kebab, or in this vegan shredded chicken!

I am a firm believer in making it taste and look as close as possible. With a non vegan husband, I am forever trying to make dishes that will blow him away and make him realise we don’t need meat in our diet. I am finding oyster mushrooms to be one of the best raw ingredients to recreate this dish with vegan kebab meat.

Spices are everything when it comes to Middle Eastern food and flavours. In this dish I use a tonne of spices and herbs mixed in with the mushrooms to create the ultimate taste.

, garlic salt and garam masala. I used a pestle and mortar

to grind the cloves and coriander seeds before mixing them all up together.

You can actually store the mix together and use it later for your very own Middle Eastern blend. If you need help figuring out how to use up the spices, check out this spice combinations guide for leftovers.

I sautéed the oyster mushrooms and added all of these spices. You could add a dash of soya sauce if you want a slightly wetter consistency, however, I was quite happy with the mushrooms having a flavour rather than being in a sauce.

Whilst the mushrooms were cooking, I prepped some salad. Typically iceberg lettuce, raw onion, pickled cabbage and sliced tomatoes are put inside a vegan shawarma kebab.

It’s also served with pickled chillis and tzatziki. Tzatziki is surprisingly easy to make, It only takes a few minutes and 5 ingredients. No vegan shawarma kebab is complete without this condiment! Get the full recipe for Tzatziki here.

I used 1 clove of garlic, a handful of dill, a squeeze of lemon and some grated cucumber mixed in a bowl with natural soya yoghurt. It was so good! As well as Tzatziki, I added a teaspoon of chilli inside the pita when it was ready to serve.

We had pita on the day I was making this recipe, however as previously mentioned warm flat bread is also fine. Top tip, I always dampen my pita slightly before warming it so it doesn’t go too crispy.

First, I started by adding the chilli sauce and layering iceberg, onion, tomatoes and red cabbage. I topped it with the spiced oyster mushrooms giving a true appearance of a typical vegan shawarma kebab.

I served it on a wooden board with a pot of tzatziki, olives and pickled chillis! Hubby and I really enjoyed it!

If you don't have pita bread you can also use flat bread wrapped up into a cone.

Likewise, shitake mushrooms are also a suitable alternative to oyster mushrooms due to their texture and consistency.

Oncr youve grinded all the spices together, you can store it for other dishes. This can be your very own homemade Middle Eastern spice mix for other dishes! Make double if you fancy storing the mix.