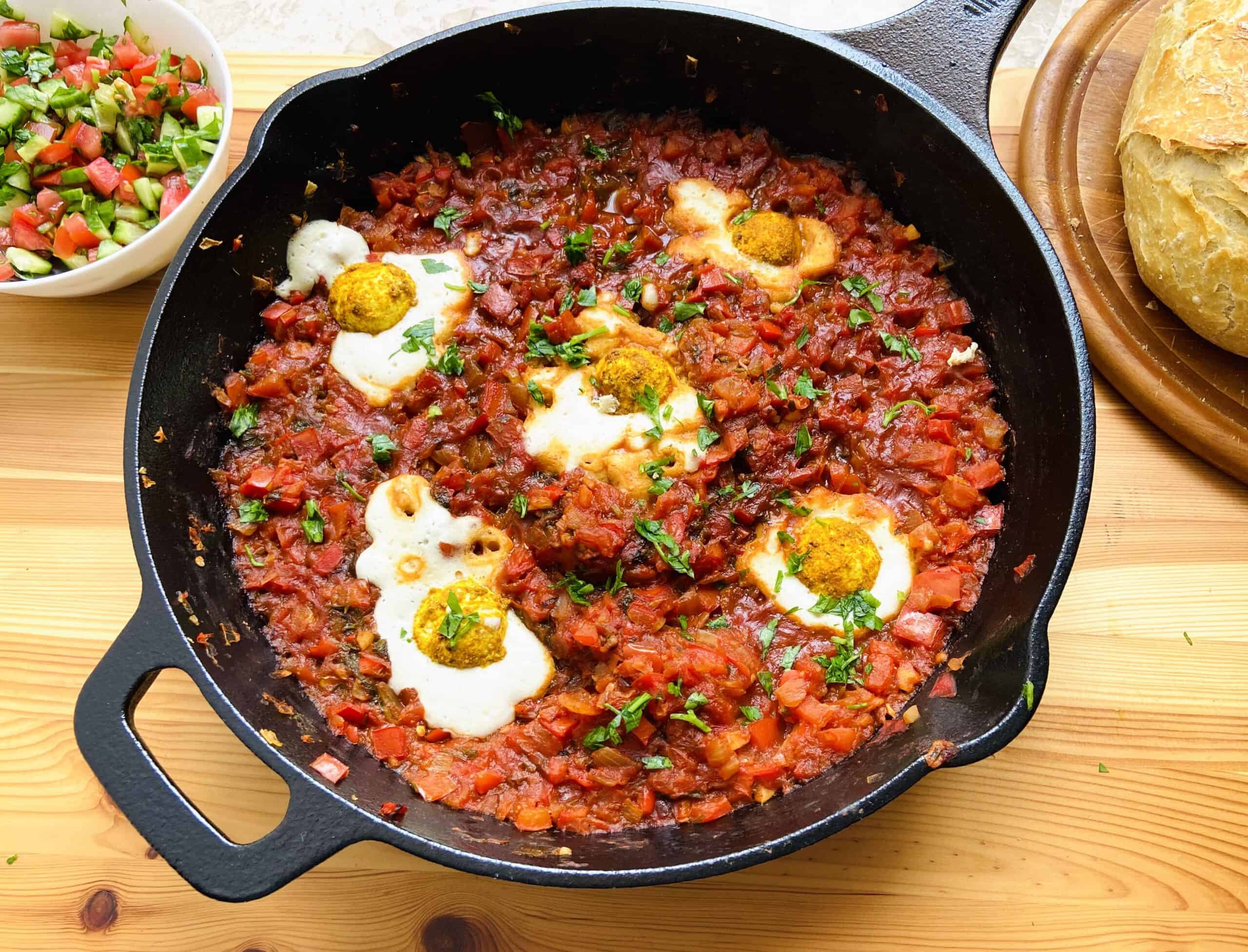 Vegan shakshuka has been a personal favorite of mine for a while. I’m not just talking about breakfast, I’ll eat it any time of day. Trust me, whether you are having a shakshuka breakfast or a shakshuka dinner, this dish is everything!

Prepare yourself for the rich, flavorful sauce that makes the base of shakshuka. And don’t forget to grab some nice crusty, but fluffy on the inside, bread to dunk into it. (See below for gluten free, alternative serving options.)

While shakshuka is classically done with eggs, I personally think it’s the least important part. I’m here for the shakshuka sauce, huntyyyy.

It’s also light on calories, healthy, and a fantastic vegan brunch option, so grab some beautiful tomatoes and lets get cooking! P.S. This shakshuka is gluten free, vegan, plant based, nut free, low carb and basically just all around good for you!

Shakshuka is a North African dish that was brought to Israel, where it is now extremely popular, by North African immigrants. Lots of Middle Eastern countries have their own slightly different versions of it, but mine most resembles an Israeli shakshuka.

Shakshuka is tomatoes, red peppers, onions, and spices cooked into a saucy stew. It’s cooked to perfection and then topped with eggs, and cooked a few minutes more.

Shakshuka is a breakfast staple in Israel and can be found on menus everywhere throughout the country, whether you are visiting Tel Aviv or more rural areas.

How to Make Shakshuka Vegan

I personally love shakshuka without eggs, no substitutions needed. It’s really delicious, especially when you serve it with some nice sides.

However, if you want to have something to star in the dish, either visually or because you want to make it a little heartier, you can add a number of things.

If I’m going all out, I top it with the vegan eggs that are in this recipe. They are pretty easy to make and compliment the recipe. Something to note about the tofu eggs though, they taste great in the shakshuka because there is so much flavor coming from the shakshuka itself. However, I wouldn’t try using this recipe to make a vegan fried egg, it would be a bit bland on it’s own.

You can also just go simple and drop in some cubed tofu, vegan sausages, falafel balls, chickpeas, or whatever else floats your boat, instead of the vegan eggs.

Shakshuka gets its flavors from vibrant veggies and some light spices. It’s simple and healthy! Here’s what you need:

If you plan to make the tofu eggs as well you’ll need:

Shakshuka Without Eggs – Putting it Together

Making the shakshuka is just about sauteing the ingredients and letting the flavors come together, while softening into a beautiful texture.

To make the fake eggs, you’ll need a melon baller

or similar. I make the yolks by just scooping out pieces of the silken tofu and rubbing them down with a turmeric and black salt combo. (If you’ve never had black salt, it’s a really awesome sulfuric salt that tastes just like eggs.)

To make the egg whites, just blend the remaining silken tofu with some water and potato starch, and some more black salt.

Once the base of the shakshuka has come together, make shallow holes in the sauce to pour your egg whites in and then top with the ‘yolks’. Then it just needs a few more minutes to cook through and its finished!

What to Serve with Shakshuka

My favorite thing to serve with shakshuka, as mentioned earlier, is thick crusty bread. It mops up the sauce and turns this healthy dish into a comfort food.

You can also serve it with other Israeli classics like vegan labneh, Israeli salad (yes, Israelis eat salad for breakfast!), hummus, or falafel balls to make it a hearty dinner.

If you are keeping things gluten free, serve it with some sort of gluten free starch like roasted potatoes or quinoa, to help absorb all the flavor!

Once you get the feel of shakshuka, it’s really easy to mix things up. Want more greens in your diet? Throw in some spinach towards the end of the cooking process. Like things spicy? Double the chili flakes.

You can also include some fun toppings to mix it up. Sprinkle it with chives, green onion or any other herbs you enjoy. You can also drizzle some pesto on top for an additional burst of flavor.

The recipe does not call for a large amount of sugar, but it does really help balance the acidity out from all the tomatoes. If you are not eating refined sugar, feel free to swap it out for any type of sweetener you do indulge in.

You can easily do that with a substitute like coconut sugar

, or the likes. Because it’s a small quantity, it doesn’t effect the taste much so almost any sweetener will work.