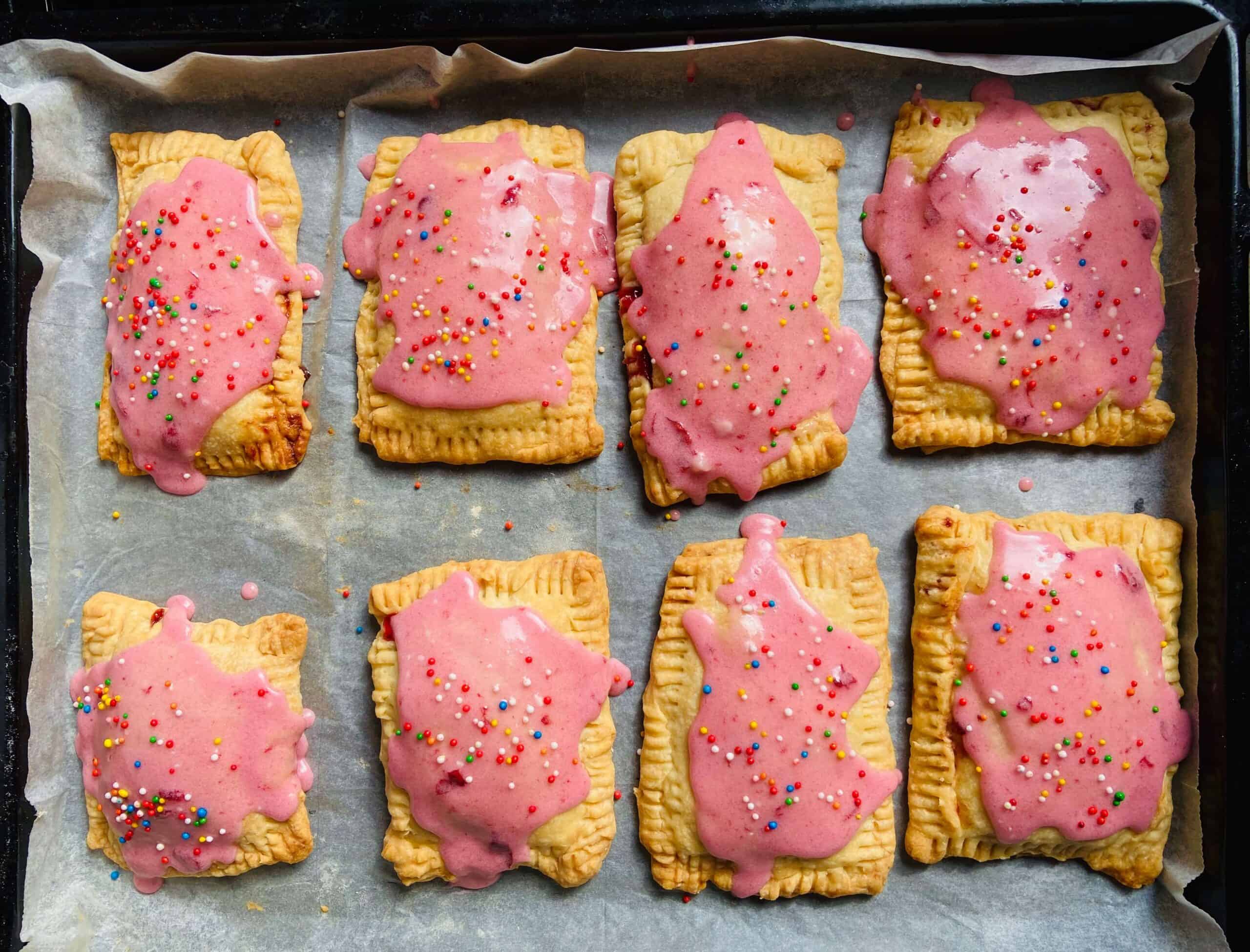 I’m not sure there is anything more American than pop tarts. A breakfast that is basically a dessert, that comes wrapped and ready to go, plus of course it’s super delicious!

For many, pop tarts are a meal that brings back childhood memories, so I decided to give you all the feels with these flaky, amazing vegan pop tarts. I went with frosted cherry pop tarts. If you are a cherry hater, you can easily switch out the cherry jam for whichever flavor you like best. It’s really that easy!

These pop tarts are a really fun vegan brunch option and great for meal prep as well, since they are freezer friendly. Looking for more awesome vegan recipes? Check out our free 30 day meal plan.

Believe it or not, some store bought pop tarts are vegan! The unfrosted versions of blueberry, strawberry and brown sugar cinnamon are all accidentally vegan.

Of course if you are missing the frosted versions, I feel you. You can also just use the frosting recipe below to throw on your unfrosted, store bought pop tarts.

The crust of our vegan pop tart is essentially a pie crust and the filling is just jam. So it’s mostly run of the mill ingredients! Here’s what you’ll need:

If you want to make it healthier, you can swap in some solid coconut oil instead of using the vegan butter. If you do use coconut oil, you’ll have to work quickly so it doesn’t melt and it definitely gives the pastries a coconut flavor.

You can also add in some vegan cream cheese to the frosting if you want to offset some of the sweetness.

How to Make Pop Tarts (Vegan)

If you have a food processor, it is especially easy to make pop tarts. You can make it without one though, it just takes a little more elbow grease.

For an optimally flaky crust you need to incorporate your vegan butter quickly before it softens. The food processor will do all this work for you in a minute flat.

If you are working with your hands, make sure to keep the ingredients really cold before you use it. Chopping the butter into smaller pieces will also help, so that you can work it into the flour quickly.

Once the dough ingredients are combined, separate it into two balls, then cover them and refrigerate. You just want to get the dough balls nice and chilly before you work with it again.

Once chilled, take out one dough ball and roll it out thin. Cut it into pop tart shaped rectangles and spread 1-2 tablespoons of jam on half of them. Then cover them with a second rectangle of dough. You can seal the edges with a fork to get some nice marks around the edges.

Once you’ve finished shaping your pop tarts, poke holes in the top, line them up on a baking sheet, and freeze. It needs to freeze for a couple hours before it bakes to get that perfect pastry texture. You can also wait until they are frozen solid and transfer to a freezer container if you’d like to store some of them for a later date.

When they are done freezing, pop them into a preheated oven. Your fresh baked pop tarts will be ready shortly!

I think we can all agree that pop tarts without frosting will always lose to the frosted variety. Unfortunately the frosting is one of the problematic ingredients in store bought pop tarts, as it’s made with dairy.

Luckily, making dairy free pop tarts frosting only takes a minute and a whisk. Whisk together a bit of jam, plant based milk, powdered sugar and just a drop of lemon juice to cut through the sweetness.

The frosting will be on the runny side but it will firm up if you leave it to sit on top of the pop tarts for a bit. Do not put it on the hot pop tarts until they’ve cooled though, unless you want a runny mess. For some extra flair, throw on some sprinkles!

You can also freeze unfrosted leftovers and defrost them in the oven or toaster. If they are frosted it’s probably best to defrost on the counter top so that the frosting doesn’t melt off and run everywhere.

Don’t Forget to Pin This Recipe For Later!

* If you don't have a food processor you can make this by hand, but it will take a lot more elbow grease to make the dough come together and you need to work quickly to keep the dough cold.

Could I add cocoa powder to the pastry dough to make the cookies and creme version? Those are my absolute favorites but you’ve captured me with these strawberry ones too. I’ll have to make some!

Yeah for sure! That sounds like an awesome idea, now I'm thinking of making it :) You might need to put just a touch less flour in it to blance out the ratio.