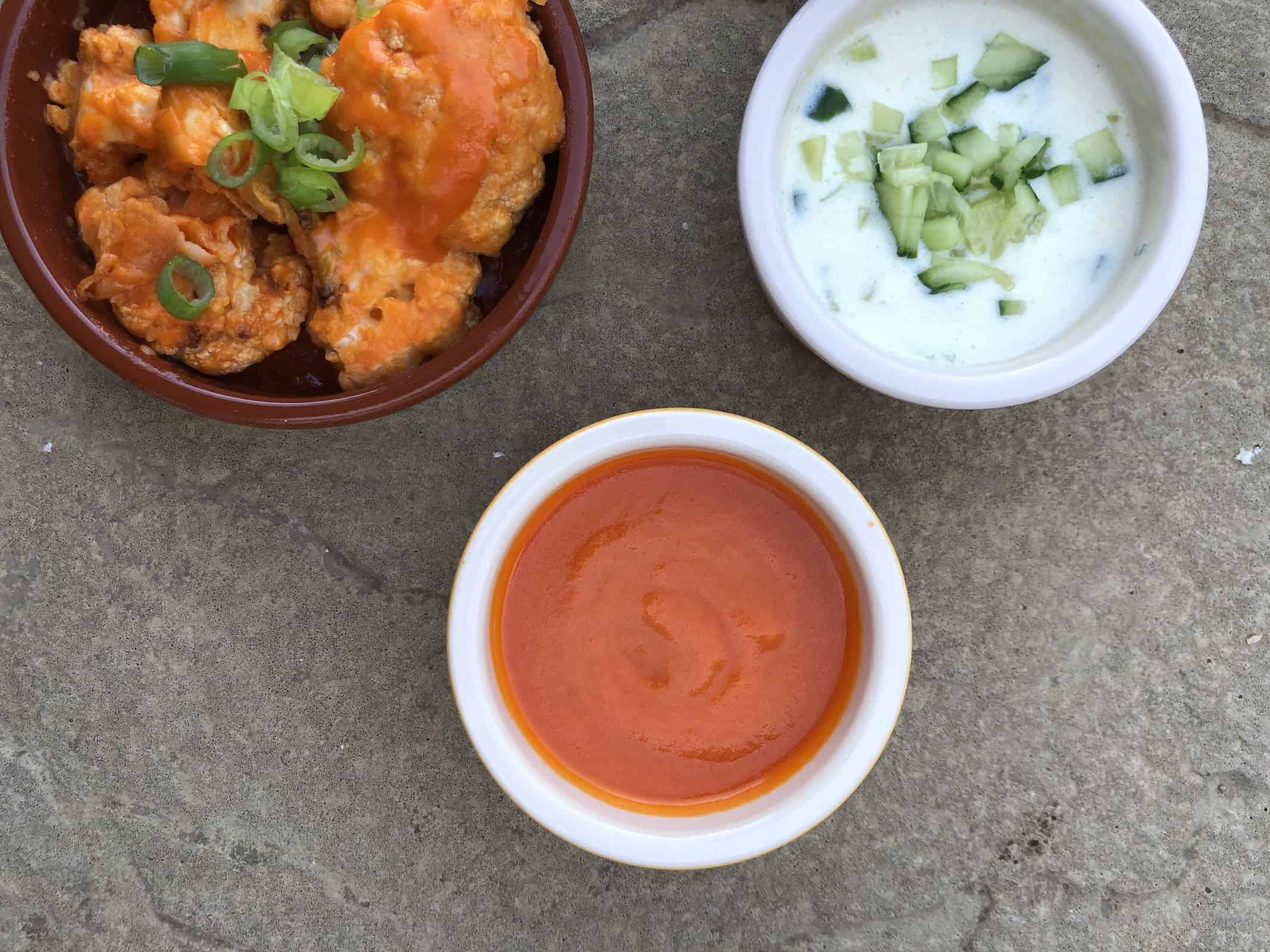 This vegan buffalo sauce recipe is really easy to make and requires only a few ingredients. It works perfectly for vegan cauliflower steaks, vegan wings and simply for dipping.

Vegan buffalo sauce is one of my favourite and easy vegan condiments to make.

Like many condiments out there, traditionally buffalo hot sauce is not usually vegan as it calls for butter and sometimes Worcestershire sauce (this contains fish).

However, like most foods, with a few tweaks and alternatives, a delicious vegan hot wing sauce is easy to make!

The main ingredients for this buffalo sauce recipe are:

There are so many vegan butter brands on the market, which is how to make vegan buffalo sauce.

In the UK, there is the whole Flora range, Pure, Vitalite, Koko and many larger stores own brands.

In the US, Earth Balance, Nutiva, Wayfair Whipped or Miyoko are good options to achieve this buffalo sauce vegan recipe.

How to make buffalo sauce vegan

. It is the spicy cayenne pepper that gives it a real kick and vibrant colour.

Is Franks Red Hot vegan? It is indeed. Its made of only 5 ingredients, cayenne pepper, vinegar water, salt and garlic powder. A simple vegan hot sauce that packs a punch!

However beware of any mainstream, pre-made buffalo sauce brands as they may contain dairy.

These buffalo sauce ingredients are fairly accessible and can be found in most well stocked supermarkets.

What to eat with buffalo hot sauce recipe?

Vegan Buffalo Wing Sauce can be used to make hot and spicy cauliflower vegan buffalo wings. It would go great on a vegan buffalo chicken salad.

I personally love to have it as a dip for chips on a sharing platter and have been keen to make a a hot buffalo version of these vegan BBQ seitan ribs!

Some alternative snacks to enjoy this easy homemade buffalo sauce with are popcorn, sliders, mac and cheese and vegan sushi!

If you wish to make a mild buffalo wing sauce, simply reduce the amount of hot sauce you put into the recipe.

It also pairs really well with a cooling vegan ranch sauce or even this vegan tzatziki.

If you want to make buffalo sauce spicier and crank up the heat a notch, simply add more hot sauce!

How do you make buffalo sauce from scratch?

It is a simple task of gently melting the vegan butter in a pan and stirring through the hot sauce and other additions if chosen.

Whisk it up and store it in a clean container ready for use.

The trick to prevent the vegan buffalo sauce from separating is melting the vegan butter gently.

How to make vegan buffalo wings

You have the option of coating cauliflower florets in vegan batter, roasting for around 15 minutes, then coat in this basic buffalo sauce recipe and return to the oven for 15 minutes until gooey, spicy and glorious!

I have made this vegetarian buffalo sauce a few times now, one time it appeared to separate as it was cooling down and I simply continued to give it a stir whilst it cooled down in the fridge, with no problems at the end.

Its always good to give it a little shake or stir before using once it has been refrigerated anyway to make sure the ingredients are dispersed evenly.

** If you want a milder vegan buffalo sauce recipe, omit 1-2 tablespoons of the hot sauce

*** Be sure to heat the butter gently and whisk in the other ingredients on a low heat to prevent separating. If this does happen, simply pop the jar of hot sauce in the fridge for cooling and be sure to stir it every so often.

This is an estimated calculation