Choosing The Best Vegan Milk For You! 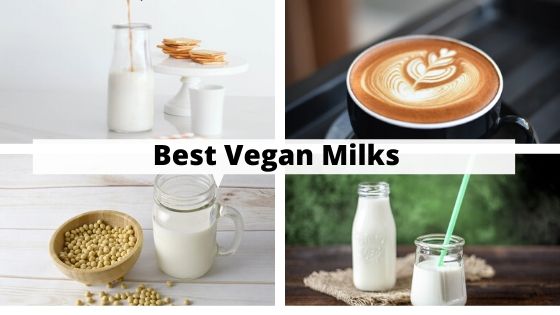 After Veganuary this year, we’ve realised so many of our new fellow vegans ask about the best vegan milk to use for a variety of situations. Dairy milk is on the decline and plant based milks are on the rise!

The dairy industry is barbaric and I think more and more of the younger generation are coming to realise this through the power of social media!

With more vegan activists taking centre stage, people are seeing what the dairy industry is REALLY like and so many people are turning to the plant based option.

The only issue is there are absolutely tonnes of alternatives! As a newbie, it can be hard to pinpoint your favourite one since there are so many options to choose from.

In your honour, I have put together this guide to the best vegan milk out there and what you may want to use it for.

We will all have different health needs, taste preferences, not to mention factors such as allergies and intolerances. I have touched on all of these points for each milk listed here.

Best Plant Based Milk For You

We are huge fans of Oatly milk and it general it’s available in the USA, UK and many other European countries. It originates from Sweden and this brand have been through the mill (literally) with Swedish farmers taken them to court for using the name ‘milk’.

They have some really awesome marketing campaigns that makes evert person question their use of dairy.

Interestingly this milk has to be one of the most popular plant based alternatives on the market. Most vegans highly rate this milk brand as it has the barista range which is really good in coffee.

A lot of vegan alternative milks split in hot drinks and also don’t always taste that good. Most people say coffee is the hardest thing to get right, but Oatly Barista is absolutely the best in my opinion for coffee.

The Barista range is a fee cents more expensive than their standard carton of milk as it’s more creamier. The Standard carton is ideal for cooking, smoothies and cereals.

Oatly is also an ideal option for those with nut and soy allergies.

Out of all the milks, Oatly gets our best vegan milk for coffee award!!!!

Soya milk was probably one of the first alternative vegan milks on the market back in the day. With more and more options now coming out, it does seem less popular than nut and oat milks.

That said, if you are gluten intolerant or have a nut allergy, soya milk could be ideal for you. it can be used in cooking, smoothies and on cereals, however in general I do find it splits in hot drinks.

Soya milk can be found almost everywhere in the world. Even in the most far flung corners, when I have asked for alternative milk, I can usually always get my hands on soya milk.

I find some brands can taste far too sweet and have additives, in general I advise sticking with unsweetened soya milk

in summary, soya milk is:

Have you tried Hemp milk? If you have heard of hemp before it comes from the cannabis family but hemp is not from the drug part of the plant. Don’t worry you are not going to get high off drinking this milk!

Hemp has a tonne of health properties and is very popular amongst naturalists. The plant based omega 3 fatty acids is thought to regulate blood pressure and reduce cholesterol.

This milk has more of a nutty taste and is comparable to almond milk. If you are both gluten and nut intolerant / allergic, hemp is a great option for you. In summary:

Almond milk is probably up there with one of the most popular alternative milks. It’s widely available in the US, Canada, UK, Australia and NZ.

I am not personally a big fan of almond milk from a taste perspective but I know a lot of vegans and non-vegans for that matter love it.

It’s considered a good source of vitamin E, calcium and low in calories. It is considered the healthiest of all the nut milks.

One thing that really put me off almond milk recently is the effect it is having on the bee population. Bee’s are essential to the growth of the almond industry but they are dying in the process.

This article gives a full overview of the devastating impact the almond industry is having on the bee population. Many are being wiped out by pesticide exposure.

Cashew milk is less commonly seen on every supermarket shelf and is probably considered one of the more premium milks on the market.

Similar to other nut milks cashew milk is considered to have incredible nutritional and health properties.

In particular it supposedly aids blood clotting and contains magnesium. It’s also rich in antioxidants and zeaxanthin which is good for eye health.

Rice milk is another popular alternative milk. It is generally widely available and does not contain much in the way of protein. However, in general it is fortified with calcium.

Rice milk is quite starchy so it’s not ideal for anyone trying to maintain a healthy glucose range, I am thinking of diabetics here. It does have antioxidants and is a good source of vitamin B.

We can go on and on with even more nut milks but let’s finish off with hazelnut milk. Hazelnut is higher in calories than other nut milks so could be helpful for someone looking to bulk up.

Making Your Own Vegan Milk

If you are in a rural area or maybe a country that doesn’t manufacture alternative milks, your options may be limited. In this case, I can highly recommend making your own vegan milk, it’s a lot easier than it sounds.

I have made oat milk in the past and I promise it only take a little bit of time.

You can see some recipes here:

If you liked this article, you make also like:

How to transition to a vegan lifestyle

How to Get Vitamin B12

Disclaimer: This article may contain affiliate links, by using them it does not cost you any extra but we will get a small % of the sale. We thank you in advance for your support.

Author: Karen Edwards
Filed Under: Veganism
Get Your Free 30 Day Easy Vegan Meal Plan
Vegan Recipes For Kids To Get Involved In Cooking

2 thoughts on “Choosing The Best Vegan Milk For You!”