Is Honey Vegan? | Why Is Honey Not Vegan? 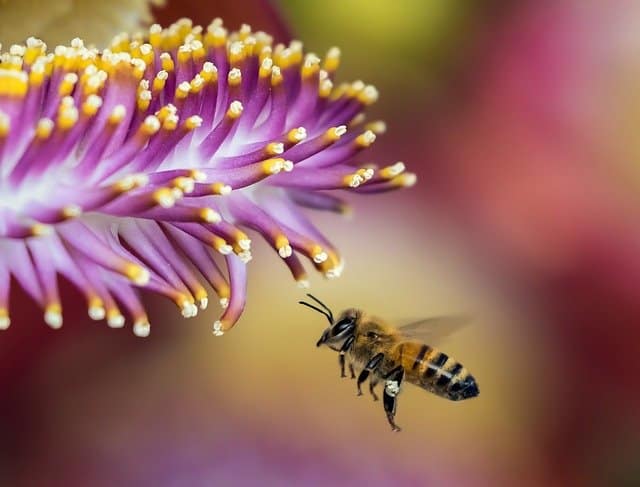 A question posed time and time again is whether honey is vegan?

This seems to be a topic where some people sit on the fence with, but certainly one that has the potential to trigger a big debate.

It is often thought that bees create their liquid gold especially for humans, however this is not the case.

Honey is not necessarily an animal product per se, but the fruits of the hard labour bees put in to creating it.

There are many nuances to this discussion. We feel it is important to break down the information, discussing whether honey is vegan friendly.

The vegan society’s definition of veganism is as follows:

“veganism is a way of living which seeks to exclude, as far as is possible and practicable, all forms of exploitation of, and cruelty to, animals for food, clothing or any other purpose.”

Which depicts quite clearly that honey is not vegan friendly, as it uses and exploits the honey bee to create honey.

Honey is the fruits of their labour. But there is more to it.

We all recognise honey as a thick golden, syrupy substance. It is often used in baking, hot drinks and to top our porridge or pancakes in the mornings.

Bees work hard collecting nectar from various flowers. They have special enzymes in their stomachs which helps break this nectar down.

This is just the beginning of a lengthy process. Upon returning to the beehive, this partially broken down nectar is regurgitated and passed onto another bee for further breaking down.

This is repeated with the nectar, before being transferred into the honeycomb. This process of regurgitating bee vomit is enough to turn many vegans off!

In the honeycomb, the partially broken down nectar is not quite honey yet.

The bees continue to work extra hard by fanning it with their wings to help remove excess water. Once the right amount of water has been evaporated, the bees golden liquid remains.

It is thought it takes the life work of 8 honeybees to create 1 teaspoon of honey.

One of the main pillars of transitioning to veganism is for health purposes. Overconsumption of animal products has been shown to be damaging to health.

However, honey and particularly Manuka honey is often applauded for its medicinal benefits. It is often thought Manuka honey has antibacterial, antioxidant and anti-inflammatory properties.

Manuka honey however is very expensive and difficult to come by – as it is native to New Zealand.

Honey is also often seen as a healthier alternative to processed sugar. However it is still high sugar food, which humans have become accustomed to enjoy the taste of. This does not mean it is nutritionally adequate.

Additionally, honey is recommended to be consumed only in small amounts as overall it lacks the major nutrients humans require. We don’t actually need honey to survive.

However with this increased demand worldwide, for constant supply of honey on our supermarket shelves, the nature of production has changed drastically in recent decades.

Due to the epic demand for honey worldwide, commercial beekeeping is big business.

The trouble is, with drastically decreasing bee population due to chemicals used in farming methods, it is impossible to keep up with this worldwide demand whilst still maintaining a high quality, pure honey product.

Large scale produced honey is more than likely not a pure blend but a mixture of all sorts from various global locations.

There are now many commercially set up beehives to attempt replicate a bees natural habitat, in an attempt to meet demand (Natural Beekeeping Trust)

Bees are themselves very clever individuals, with complex social structures. They are a social group of beings, living together in large families.

The family or bee colony, typically is made up of queen bee, worker bee and male drone bees. Each bee takes on complex, intertwining roles to help run the beehive.

The running of the beehive could not be achieved on a solitary basis, meaning they also have advanced communication skills.

Additionally, bees have their own nervous system which they feel sensations to a degree such as pain and pleasure.

With commercially produced honey, the queen bees are subjected to having their wings clipped, artificial insemination and haphazard handling according to PETA. This may not be the case of local beekeepers however.

Yes, this is extremely cruel and we all know that artificial insemination, which echoes the dairy industry – is not very kind or natural. However it makes sense in terms of cashing in on the end result – honey.

It is thought the bees actual honey is replaced with an artificial, sugary substance such as corn syrup instead, which has zero nutrition, also affecting the bees life span.

Bees work extremely hard in creating their honey, in which this hard work is then capitalised on by humans.

Bees are instrumental in the ecosystem worldwide and contribute a great deal to our environment, yet they are another victim of humans consumption demands.

Many people ask what about local, organic and free range honey? But the truth is this is very hard to come by.

There are literally so many alternatives to honey which are now easily accessible.

You can even make your own homemade vegan honey using this awesome recipe from the beautiful Sevenroses blog.

It is also super easy to recreate recipes that would traditonaly contain honey, such as this vegan honey mustard.

The Bottom Line – Honey Vegan or Not?

Having delved further into the intricacies of mass production of honey, personally, I have concluded that honey is not vegan.

Honey bees have not by chance created honey in some sort of symbiotic relationship with humans, more so to feed and sustain their colonies in the winter months.

Bees are sentient beings and suffer greatly at the cost of mass produced honey.

There is always going to be a debate as it seems people don’t care as much about insects as they do their mammal counterparts. Especially when we see the gravity of cruelty that occurs on factory farms.

Insects do often bare the brunt of plant based food production and we can’t always eradicate harm caused to insects, for instance stepping on an ant by accident.

Arguing and debating over whether honey is vegan with non-vegans can be seen to diminish the concept and core ethics of veganism and be somewhat off-putting.

However it seems to be more of a genuine query and conversation to those who have already relinquished animal products such as meat, dairy and eggs.

Admittedly, I considered myself a vegan for a few months before I really thought about the honey on this level.

Does eating honey affect whether you are a good or bad person? No, of course not. We are not here to judge.

Although it does not fall within the ethical philosophy of veganism, we should certainly not be policing other peoples habits, but simply sharing information and letting people make up their own minds.

The last things we want is arguing over labels within veganism.

Please note this article does contain some affiliate links, in which we will earn a very small percentage of any purchases made. Thank you.