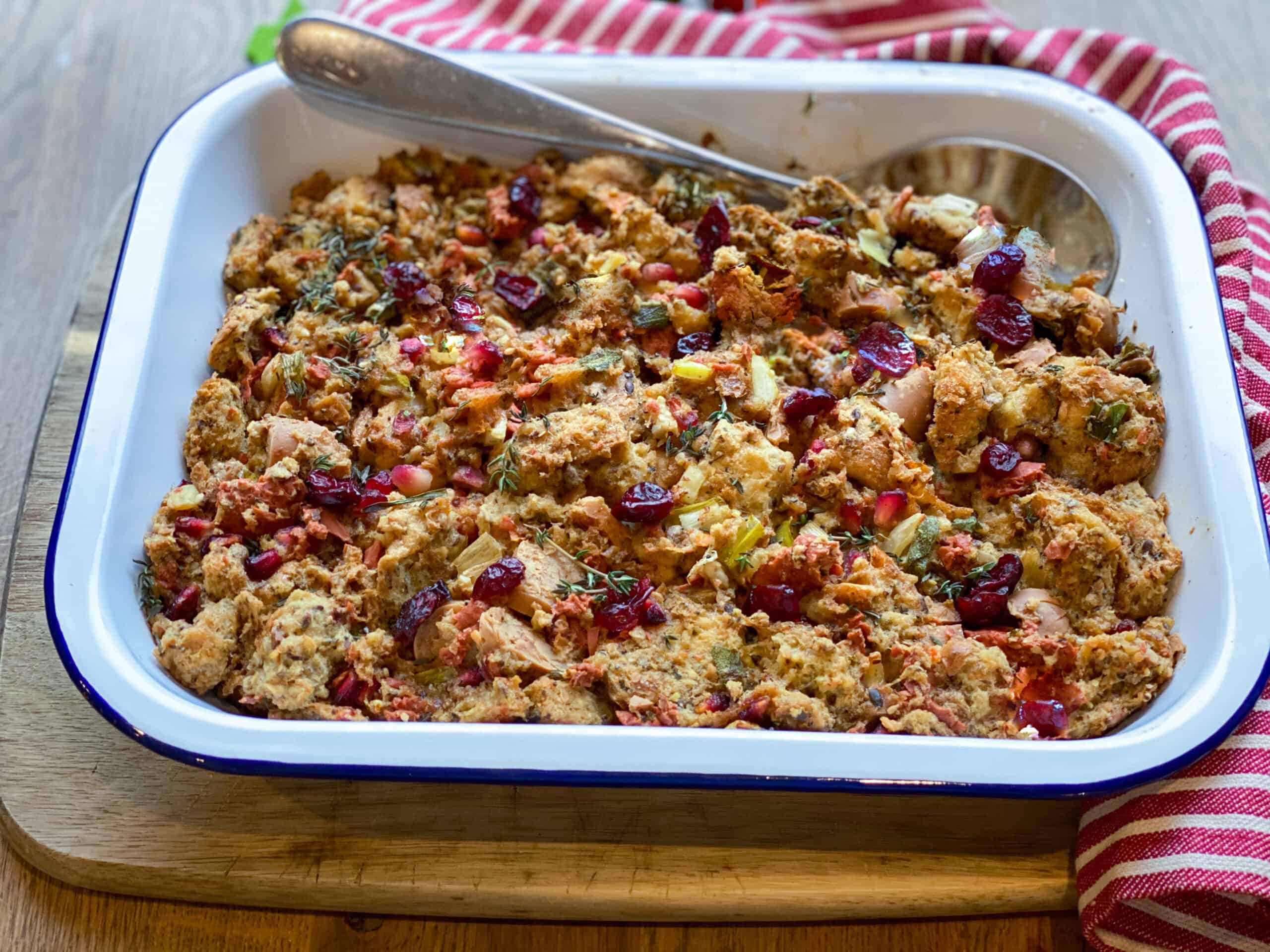 As a kid I absolutely loved stuffing with my Sunday dinner. It was a tradition in our house to have a big roast with yummy potatoes, lots of vegetables and gravy.

Of course we had roast meat when we were kids. However as an adult I have become vegan and I am loving veganizing old favourites. This vegan sausage stuffing is literally delicious. It works perfectly with a fancy dinner such as Thanksgiving, Christmas or Sunday roast.

The key to this recipe is using really meaty vegan sausages. We found the beyond sausages to work the best for it!

Stuffing dates back to Roman times and there is also some literature to suggest it originates from a West African dish called ‘Kush’ that was brought to the US in times of slavery.

Stuffing is predominantly made with bread that is no longer fresh. It is a great way of using it up and putting some life back into it.

Stuffing will almost always feature a mixture of herbs, such as sage rosemary and thyme. The base usually consists of sautéed onions. Over the years stuffing has evolved to become a festive favourite including fruits such as, cranberries, apples and apricots.

More recently recipe makers have been taking stuffing to the next level by adding sausage meat to it. It can be used to stuff cavities (traditionally turkey .. sad face). However we recently made this vegan seitan turkey that has the stuffing in the centre.

Instead of baking the mix we moulded it into a cylinder shape when it was still wet. It became the centre of our roast and it worked beautifully and tasted great.

Another great way to use this vegan sausage stuffing is in a sandwich, check out these festive sandwich sliders here.

Instead of making an entire baking tray of the mix, we moulded several patties for sandwiches. That’s why this recipe is so great, it’s versatile!

To make this recipe you are going to need just a handful of ingredients. First of all what I generally do is save the heel / crust ends of my bread for a few days and keep them in the freezer. I used about 6 pieces of heal / crust.

I am not use to calling them a ‘crust’! Where I am from we call it the heel of the bread but I’ve been told by a reliable source that most people wouldn’t know what I was talking about if I said use the ‘heal’.

Aside the point of my Irish wows, here is a list of ingredients you will need:

First of all, sauté the onion and garlic in a pan until soft. Cut the beyond sausages into bite sized chunks and add them to the pan. Mash them with a fork as you are cooking.

Meanwhile chop the bread crust into bite sized chunks. Put the bread pieces on a lined tray and bake in oven on 180 C / 350 F for 5 minutes. Don’t overcook them, you will just need to slightly toast them.

Once the sausage meat looks cooked add the stock and butter to the pan. Allow the butter to melt before taking it off the heat. Add the remaining ingredients, rosemary chopped fresh sage, thyme and a flax egg.

Once you have thoroughly mixed the ingredients, you can keep the wet stuffing to add to the centre of a roast for example.

However if you are not planning to use it like this you will need to transfer the stuffing to a baking tray and put it in the oven on 200C / 390F.

Bake for approximately 35/40 minutes. You should have a golden bread crumb surface with a soft interior when it is ready.

Using a large spoon put a generous serving onto each plate accompanying the rest of your meal.

If you don’t plan to serve the stuffing immediately or you may have leftovers, you can store in the fridge in a air tight container for 2 to 3 days.

As previously mentioned this stuffing is awesome in a sandwich with cranberry sauce and salad!

Disclaimer: There are affiliate links in this post. By using them, we will get a small commission of the sale at no extra cost to you. It’s the little things like this thats keep us afloat. We never recommend something we don’t believe in, always tired and tested too.